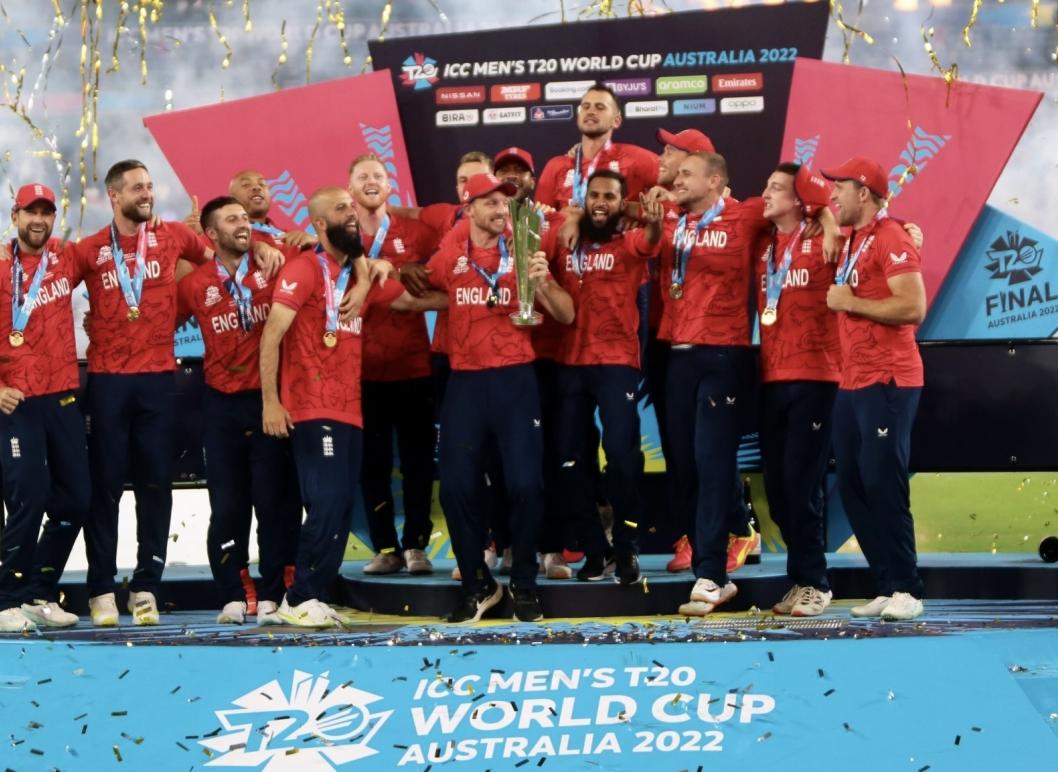 The Men's T20 World Cup was won by England on Sunday in front of 80,462 spectators at the Melbourne Cricket Ground thanks to an unbeaten fifty from Ben Stokes. Left-arm pacer Sam Curran and leg-spinner Adil Rashid both bowled outstanding stints to limit Pakistan to 137/8.

Curran (3/12), who chose to bowl first in the cloudy conditions, was impressive early and in the death overs, and Rashid (2/22) was astounding in the middle overs. England's meticulous planning and tactics, particularly in the second half of the innings, meant they never let Pakistan get away at any stage and restricted them to a score below average.

When attempting to reach the low target, England lost three wickets during the Power-play, including that of their skipper, Jos Buttler. However, Stokes exhibited composure and control in his trademark gritty manner to slam an unbroken 52 off 49 balls, which also happened to be his first T20I fifty, and lead England to victory.

Six years after being devastated in the 2016 final in Kolkata when Carlos Brathwaite of the West Indies hit him for four straight sixes in the final over, the all-rounder found redemption at the MCG by rising to the occasion and securing England's second T20 World Cup title.

Following his Player of the Match performance in the 2019 ODI World Cup final victory at the Lord's, Stokes played a crucial part for England in the final of a major event for the second time. With the victory, England became the first team in men's international cricket history to simultaneously hold the 50-over and 20-over World Cups.

Shaheen Shah Afridi left the field after bowling the first ball of the 16th over due to problems with his right knee, which resurfaced after taking a catch from Harry Brook in the 13th over and tipped the match in England's favor. Despite a low total, Pakistan fought well with the ball until the very end.

Stokes took advantage of the fact that Shaheen Afridi had left the field after only bowling one ball by smashing a four beyond of cover and lofting a six off of substitute bowler Iftikhar Ahmed just over long-off. On the opening two balls of the 17th over, Moeen Ali upped the ante by hitting back-to-back fours through square-leg and cover off Mohammad Wasim Jr.

Ali then ended the over with a strong swipe over the keeper's head that had a top edge. Although Wasim Jr.'s brilliant yorker in the 19th over cleanly bowled Ali, Stokes reached his fifty in just 47 balls with a controlled drive past deep cover. He appropriately ended the chase with a single through the on-side to give England the victory.

Alex Hales was taken out by Shaheen Afridi while England was chasing 138 runs. In the fourth over, Phil Salt was caught at mid-wicket after being cramped on tight pull by Haris Rauf. Then, in the fifth over, Naseem defeated Jos Buttler five times despite giving up five wides and being scooped by the right-hander for a six over fine leg. However, in the sixth over, Rauf discovered a small amount of nip and discovered Buttler's outside edge being caught by the keeper.

The fact that Stokes avoided being run out in the following over when a direct smash from mid-on narrowly missed the stumps allowed England to win the championship with Ali by their side.

Earlier, Stokes began the championship match by tossing England's first no-ball of the competition. He then delivered a wide down the leg side, giving up eight runs in the first over. Rizwan gave Pakistan a start with a six, slog-swept over deep backward square leg off Chris Woakes, after the first three overs had produced no boundaries.

Instead of driving off Curran, Rizwan chopped onto his stumps. In the last Power-play over, Babar Azam and Mohammad Haris each hit Woakes with a four. At the end of the Power-play, though, England had the upper hand after bowling 18 dot balls to maintain Pakistan at 39/1.

Rashid had an early impact as he used flight to trick Mohammad Haris into holing out too far. Jordan and Livingstone were the targets of some boundaries by Azam and Shan Masood.

However, England made a return as Azam's slice on a googly in a wicket-maiden over went back to Rashid for a low catch to his right. Stokes found Iftikhar Ahmed's outer edge in the subsequent over thanks to some away movement and further bounce.

Masood and Shadab made a 36-run partnership in an effort to revive. Masood and Shadab, who were looking for the big strokes, were defeated by Curran and Jordan, respectively, but England rallied back. Mohammad Nawaz chipped to deep midwicket, and Wasim Jr. holed out to the deep off Jordan in the penultimate over, giving England four wickets while allowing only 31 runs to be scored in the final five overs. This was Curran's third wicket of the game.