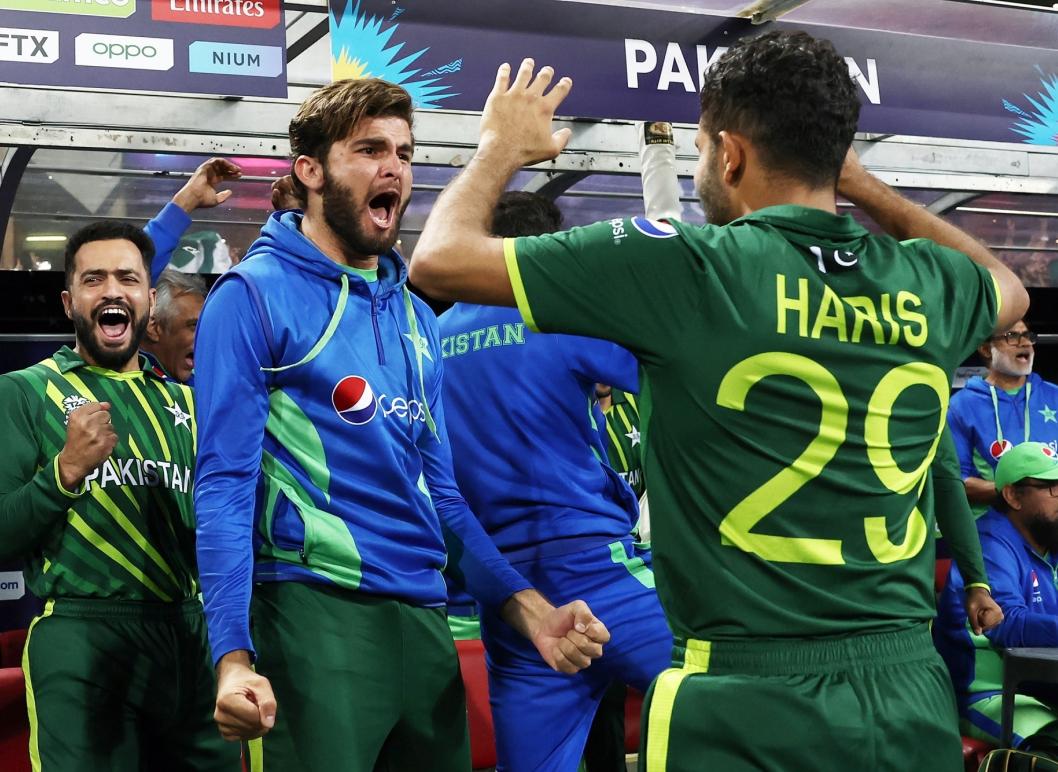 Pakistan produced a clinical performance to thrash New Zealand by seven wickets in the first semifinal at the Sydney Cricket Ground (SCG) to reach the final of the ICC Men's T20 World Cup 2022, here on Wednesday.

With this win, Pakistan now await the winner of the second semifinal between India and England, for the summit clash at MCG on November 13.

A fighting fifty from Daryl Mitchell along with a vital innings from Kane Williamson helped New Zealand recover from early jolts and post 152-4 in 20 overs after winning the toss and opting to bat first. Apart from Mitchell (53 not out off 35) and Kane Williamson (46 off 42), the likes of Devon Conway (21 off 20) and James Neesham (16 not out off 12) were the other main contributors with the bat for New Zealand.

Chasing an under-par target, openers Mohammad Rizwan and Babar Azam put their hand up when it mattered the most and gave Pakistan a blistering start, scoring 55/0 in the first six overs -- their best powerplay of the tournament with the bat.

Skipper Babar was dropped by Devon Conway and he made New Zealand pay. He along with Mohammad Rizwan negotiated the overs of Trent Boult and Tim Southee beautifully in the early parts of the innings.

Rizwan with his aggressive approach led the way and was dealing in boundaries while Babar took his own time before taking on New Zealand bowlers. Even after the powerplay, boundaries were flowing at will for Pakistan and they reached 87/0 after 10 overs.

Thereafter, Babar (53 off 42) upped the tempo and went on to outscore his opening partner to the fifty. But, he couldn't carry his innings longer after that as Boult returned to the attack and broke the century opening stand of 105 runs with the wicket of Babar.

Later, Rizwan (57 off 43) also reached to a 36-ball fifty but like Babar he also couldn't last till the end, getting out to Boult in the 17 over. Youngster Mohammad Haris played a vital knock of 30 off 26 to take Pakistan closer to the victory before getting out in the second last over.

Eventually, Shan Masood (3 not out) hit the winning runs as Pakistan chased down the total in 19.1 overs with seven wickets in hand. Trent Boult (2/33) and Mitchell Santner (1/26) were the wicket-takers for New Zealand.

Earlier, New Zealand lost the wicket of Finn Allen (4) in the very first over. Allen hit Shaheen Afridi for a boundary in the first ball of the over but the left-arm pacer trapped him in front of the wicket on the third delivery to give Pakistan an early breakthrough.

Skipper Kane Williamson then joined Devon Conway in the middle and they took the Black Caps innings forward by rotating strikes well and hitting boundaries at regular intervals.

Conway (21 off 20) was more aggressive between the two and he looked set to take on the Pakistan bowlers after spending enough time in the middle before Shadab nailed the direct hit at the non-striker's end to get rid of the left-hander batter, leaving New Zealand to 38-2 at the end of six overs.

Glenn Phillips, who has been the man in form for New Zealand, showed his aggressive intent by hitting a boundary but he couldn't carry his innings longer as spinner Mohammad Nawaz dismissed him on the last ball of his opening over.

At 49/3 after eight overs, New Zealand were in a spot of bother, needing a partnership to bail them out. Daryl Mitchell, who hadn't had a great performance so far in the tournament, joined hands with a well-set Williamson to rescue their team.

Both Mitchell and Williamson took their time to settle down and the scoring rate didn't look good for New Zealand at the end of 10 overs, but they regrouped during the drinks break and smacked 28 runs off the next 13 balls to lift themselves. The duo picked their areas to score, nudged the ball in the gaps and got twos at will to keep the score-board ticking for the Kiwis. Mitchell hit leg-spinner Shadab for a six to bring up their fifty stand.

Williamson and Mitchell stitched a crucial 68-run stand for the fourth wicket to lead the recovery and set the stage for a good finish for the Kiwis but Afridi had other plans. It was a slower delivery from Afridi and Williamson shuffled across to scoop but he got bowled during the process.

Thereafter, Mitchell continued his fighting knock and reached his fifty. He along with Neesham tried hard to hit big shots during the last few overs but Pakistan bowlers were disciplined enough to keep New Zealand to a chaseable target of 152-4 in 20 overs on a used track.

Shaheen Afridi was the most successful bowler for Pakistan with his 2/24, and Mohammad Nawaz (1/12) was the other wicket-taker.