West Indies tour of England: Stuart Broad could miss out on first test 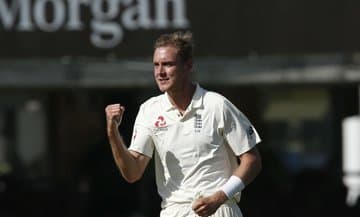 England pacer Stuart Broad could miss the first Test of the three-match series against West Indies in order to make way for Jofra Archer and Mark Wood to partner James Anderson at the Ageas Bowl.

According to a report in The Guardian, Broad “faces the prospect of missing a first home Test match in eight years as England give serious consideration to unleashing the dual pace of Jofra Archer and Mark Wood at the earliest opportunity”.

Only one spinner in Dom Bess is there in the 13-man England squad and thus it might be the case where Broad could be out of the playing XI in the match starting Wednesday.

“With no spare batsman in this final group for Wednesday and one spinner, Dom Bess, it leaves the make-up of the seam attack as the only issue still to be debated by Chris Silverwood, the head coach, and Ben Stokes, his stand-in captain,” the report further said.

The 34-year-old, who has not missed a home Test since being rested against West Indies in 2012, averages 24 with the ball from his previous two English summers.

It should be noted that England play six back-to-back Tests (three against West Indies and three against Pakistan) and thus they would have to rotate their fast bowlers in order to keep them fresh.

“It may yet be that the management hold the more physically fragile Wood back until the second Test at Old Trafford, given a potentially bouncier surface, thus putting less onus on Stokes to bowl in Southampton during what is his first outing as captain,” the paper said.