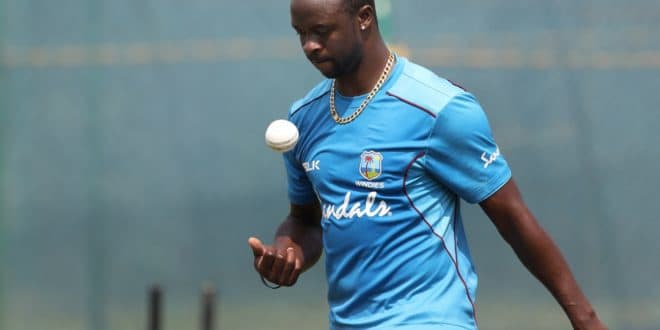 Visakhapatnam: Kemar Roach of West Indies during a practice session on the eve of second ODI match against India in Visakhapatnam, on Oct 23, 2018. (Photo: Surjeet Yadav/IANS)

West Indies pacer Kemar Roach said that the upcoming series in England is not less than the Ashes for his side.

Last year West Indies won the trophy and hence, this year they would give their best to defend it. While recalling the 2-1 win against England last year at home, Roach said, “We were relentless and it set the tone. Everyone put in and we’re looking to emulate that here. Taking the trophy back home to the Caribbean is the number one goal.”

He further told the Guardian, “Winning in England would be perfect but it’s about defending the trophy. This is our biggest series, like the Ashes for us, so it’s about getting into that zone.”

In the last series between two teams, Roach claimed 18 wickets to end as the highest wicket-taker and was awarded the Man of Series. The opening Test in Barbados, Roach’s hometown saw the 31-year-old running through the English batting line-up in the first innings.

“That day in Barbados is top for me. It was the best I have ever felt; my body was healthy, the ball was coming out perfectly, I was expressing myself. There was no added pressure, just total comfort. That’s how I got the best out of myself.”

With the first Test between England and West Indies at the Ageas Bowl in Southampton, starting Wednesday the international cricket will resume after a forced pause due to the ongoing pandemic. As a precautionary measure, the ICC decided to ban use of saliva on the ball.

While asked about this, Roach opined, “Yes, that’s the tough part, but hopefully, we can get some hot days and the guys can work up some sweat. Although it has to be a pretty warm day for us to sweat. But whatever the weather, we’ll find a way.”