Ajinkya Rahane: What do the numbers tell us?

Rahane might not have committed heinous crimes à la Gotham District Attorney Harvey Dent, but his story is not flawless either. Whether they are enough to make one overlook his great deeds is the all-important premise of this tale. 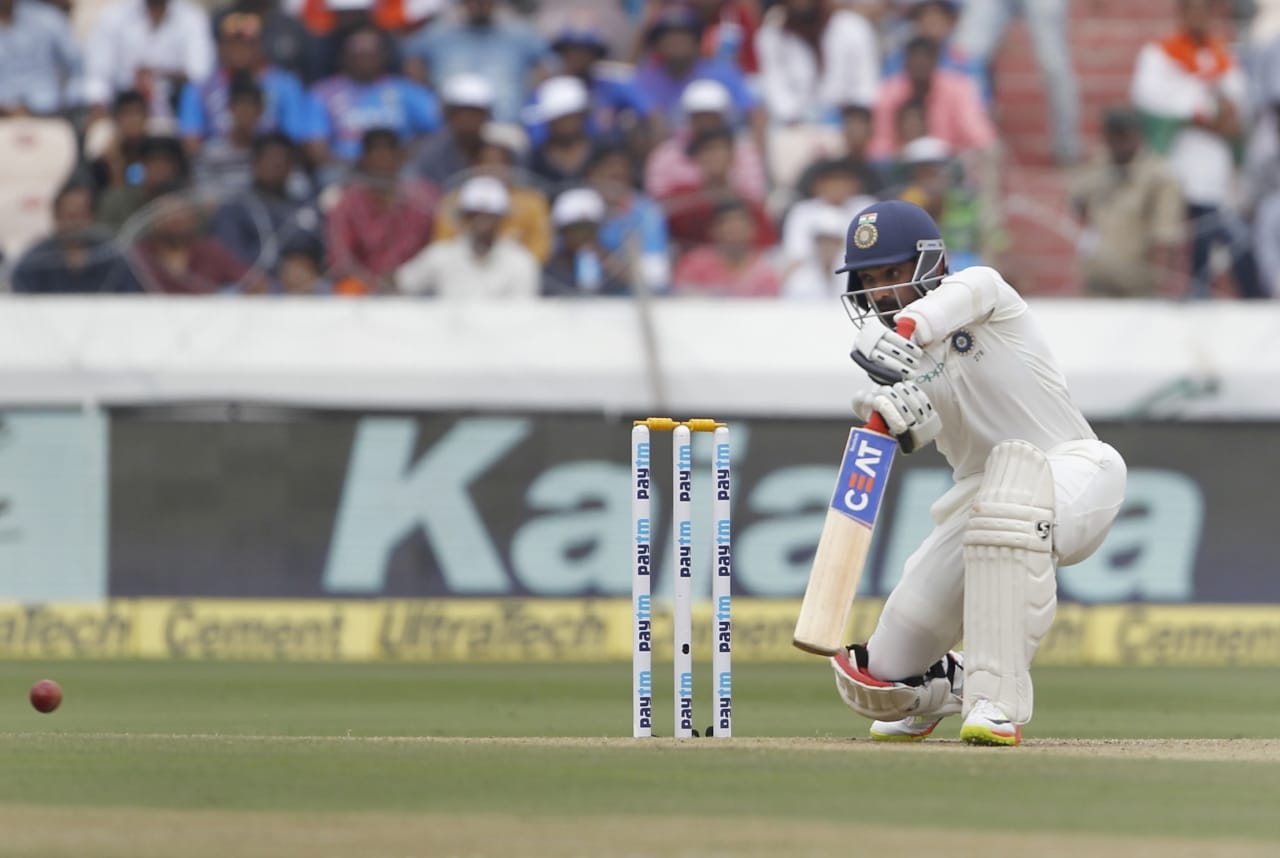 ‘Ajinkya Rahane is, I have said this many times in the past as well, along with Cheteshwar Pujara, our most important Test batsman and he is going to continue to be. We believe in his abilities, we have believed in his abilities for a long time now. He is an impact player.’

Virat Kohli did not shy away from using all the words to defend his vice-captain in February 2021, two months after Rahane had guided India back to the Test series in Australia with his century at the MCG.

The words were necessary, for a string of middling scores had prompted the critics to sharpen their knives yet again.

Kohli’s words were not needed, for Rahane would find his mojo back. On a dry Chennai pitch – conditions as different from Melbourne as possible – he added 162 runs for the fourth wicket with Rohit Sharma to help India begin mount another comeback. A substantial contribution in a low-scoring Test match.

In two consecutive series, Ajinkya Rahane had been at the very centre of India’s spirited comebacks with two very crucial knocks (112 against Australia and 67 against England).

On both occasions India bounced back to win the series after losing the first Test matches, first 2-1 in Australia, then 3-1 against England at home, to book a place in the World Test Championship final. As things stand now, Rahane is India’s highest run-scorer over the course of the almost two-year-long Championship.

Rahane’s captaincy in the historic Border-Gavaskar Trophy win also made a strong case for his presence in India’s leadership group. Fans will not be wrong in perceiving him as ‘the shining white knight’ Jim Gordon mentioned in the Christopher Nolan Batman epic.

Rahane might not have committed heinous crimes à la Gotham District Attorney Harvey Dent, but his story is not flawless either. Whether they are enough to make one overlook his great deeds is the all-important premise of this tale.

The tale of an integral member of Team India in whites.

In order to understand Rahane’s success and shortcomings, we compared some key numbers along with two Indians who have been able to outscore him in Test cricket since his debut: Kohli and Pujara, both of whom debuted before Rahane. The trio has played an almost identical number of matches: Kohli 74, Pujara 73, and Rahane 73. They have each played 26 Test series since Rahane’s debut, facing almost similar conditions and attacks around the world. Pujara and Kohli will perhaps be the best options for Rahane to be pitted against.

The first thing to note about Rahane is that he is of the rare breed that scores more runs overseas. He has also batted more away from home (75 innings, compared to only 48 at home). 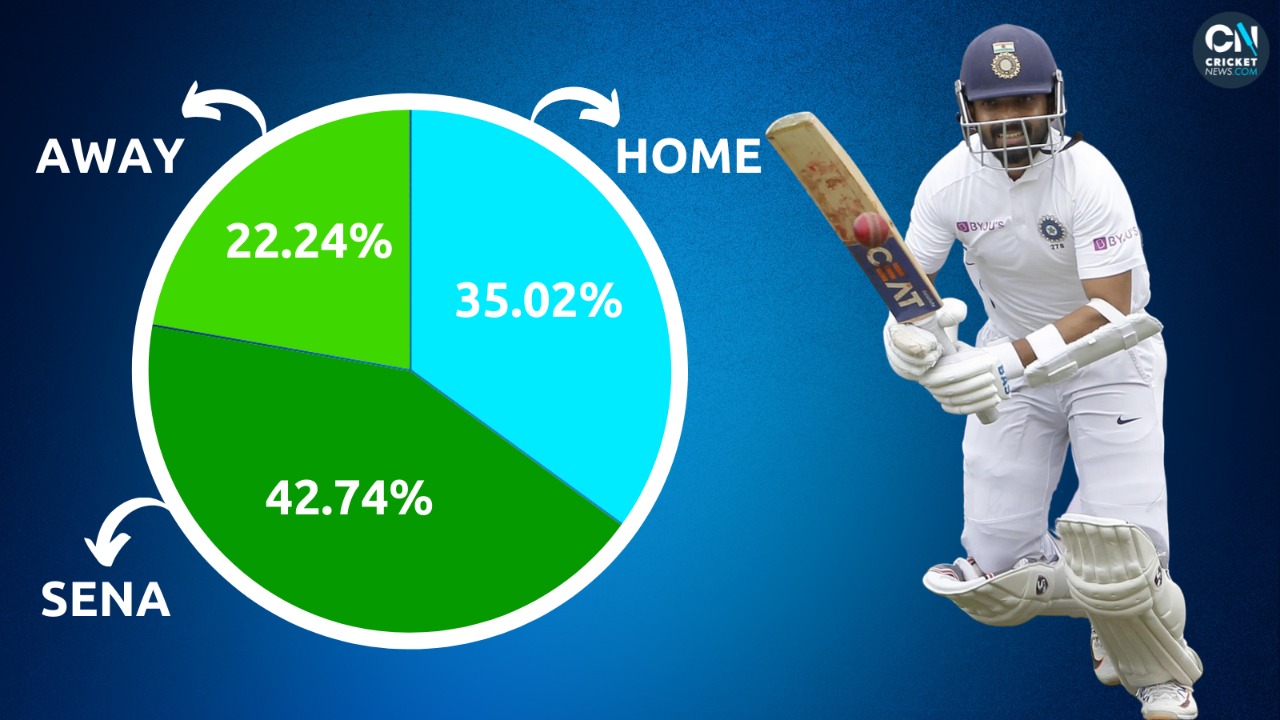 But more games do not necessarily mean more runs. Rahane has scored 64.98% of his runs away from home, 65.78% of which have come in SENA countries. The hallmark of a valuable batter. Rahane outshines Kohli (50.2%) and Pujara (42.28%) in this regard.

Rahane has also scored more hundreds away (8) than at home (4). Interestingly, India have not lost a Test match whenever he has scored a hundred. Nine of them have come in wins.

Runs over the years 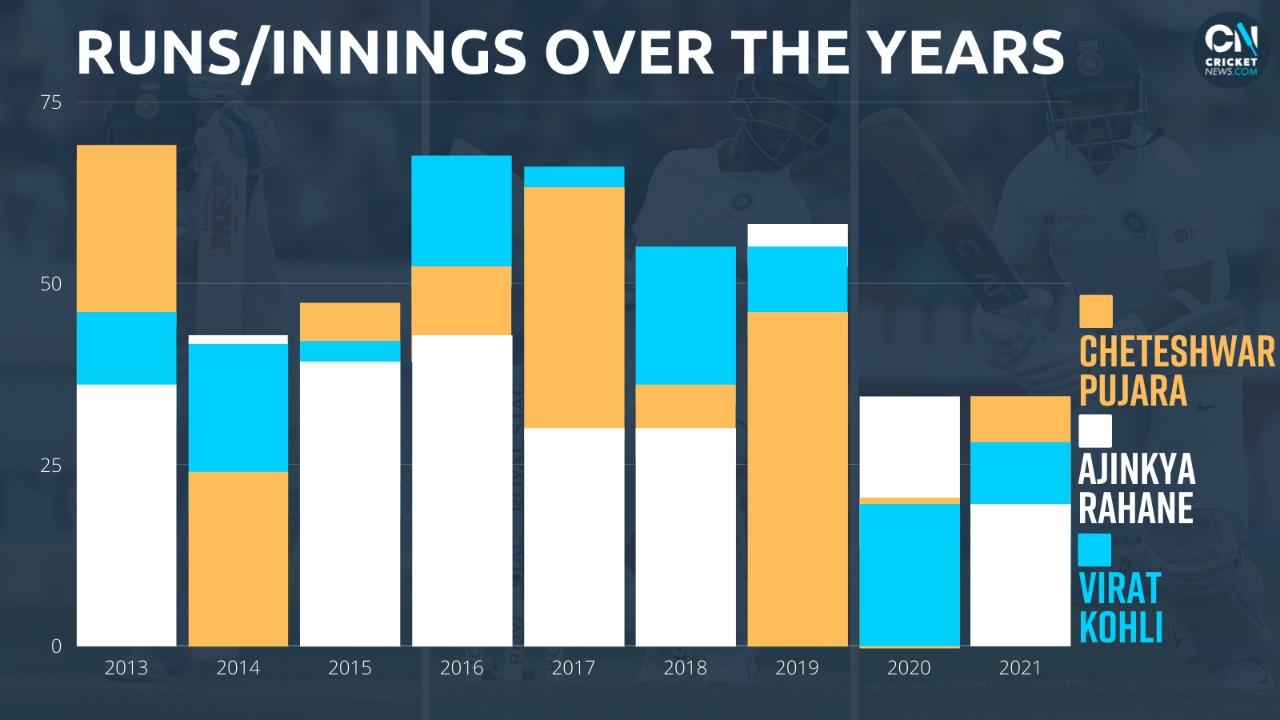 2019 was the best year for India’s vice-captain in terms of runs/innings.

Rahane made his debut in 2012/13 against Australia at home. ‘Consistency’ has been a keyword for his critics. Taking runs/innings into account, he outdid both Kohli and Pujara only in 2019 and 2020.

Rahane has also been able to cross the 50-mark in only one calendar year. That pales against Pujara (3) and Kohli (4). But this may not be the most accurate argument while comparing a No. 5 with a No. 3 and a No. 4.

Hence, we decided to devise a simple consistency band, highlighting fifty-plus scores per series for all three since Rahane’s debut series. We considered 26 for each on the red band. The ones they did not play are highlighted in white. The greens signify the 50 plus scores.

If some green bands are thicker than the others, it is because they have hit more fifty-plus scores during a particular series/phase. 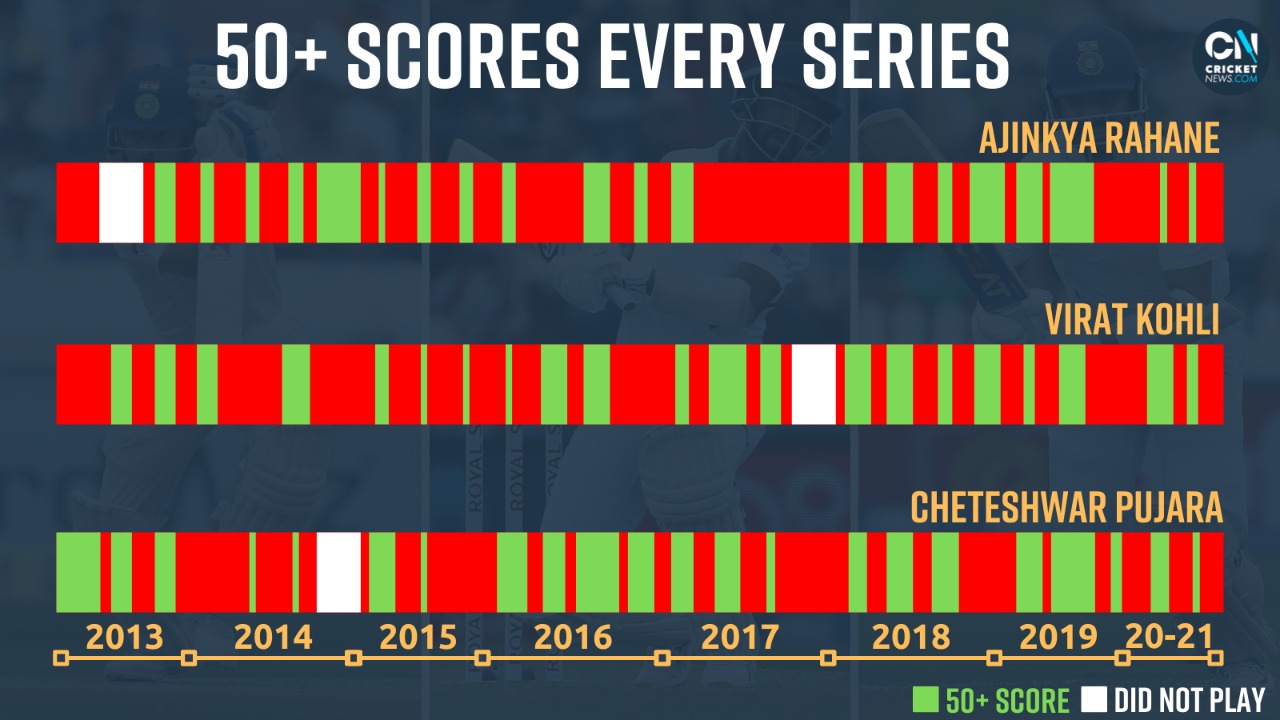 It is noticeable at first glance that Virat and Pujara have had lesser spells of red (no fifty), especially around 2017 and some part of the year 2018. But since then, the difference between the three has not been as significant.

Since January 2018, Kohli and Pujara each have 17 fifty-plus scores while Rahane has 14.

Again, this may not be a completely fair way to assess, given that it does not involve scores when a batsman is not out. But even then a picture can be drawn based on consistency over the years and series that have been played.

The best way to start an argument in favour of Rahane will be to look at the World Test Championship’s runs chart. Rahane leads the chart for India and is placed fourth overall. He also has the joint-most fifty-plus scores for India in WTC (9) along with Rohit Sharma.

But the argument becomes more compelling when one looks at the different kinds of innings he has put on display in this timeline. Let us consider the Antigua Test of 2019 and the Boxing Day Test of 2020 into account.

In Antigua, his 102 off 242 balls with just five boundaries highlighted his grit and patience, a scarcely available asset in the era. But equally important was 81 off 163 balls in the first innings against the fall of wickets. A more free-flowing knock with 10 boundaries on a damp wicket that helped India register 297 on the scoreboard.

Melbourne was a different ball game. The 36 all out of Adelaide was a hard blow, difficult to overcome. Not many gave India much of a chance against the Australian bowling powerhouse, especially in the absence of Kohli.

At MCG, captain Rahane walked in to bat at number four with just 61 on the board. And even India’s usual number four could not hide his emotions for an aggressive yet resilient counterpunching performance from the stand-in skipper.

Much in contrast with his stand-in Antigua, this was Rahane showcasing his muscles as an aggressive batter, without for once going out of his way to smash a ball. At the same time, he did not hesitate to hit one outside off against the same bowler who had dismissed him a week ago during the Adelaide debacle. A delicacy for every Test cricket fan.

There was little doubt about Rahane the batsman in his initial years. He is the only Indian to score his maiden Test (118 in Wellington) and ODI century (106 at Edgbaston) in SENA countries.

Since then, he has scored more memorable knocks across the globe in the years to follow. Lord’s 2014, Antigua 2019, Melbourne 2020 bear testimony of his class. His hundreds are more of a necessity to addicts of cricket’s longest format, where it is seldom wrong to ask for more.

After all, it is one of the few fixations that do no harm when consumed in abundance.

A sports podcaster/broadcaster and content creator who has worked across with Digital & broadcast media houses helping them come up with consumer-relevant content. I dig sports and technology; firmly believing that the right content along with the use of new technology and pertinent platforms can enhance the customer experience and engagement immensely.