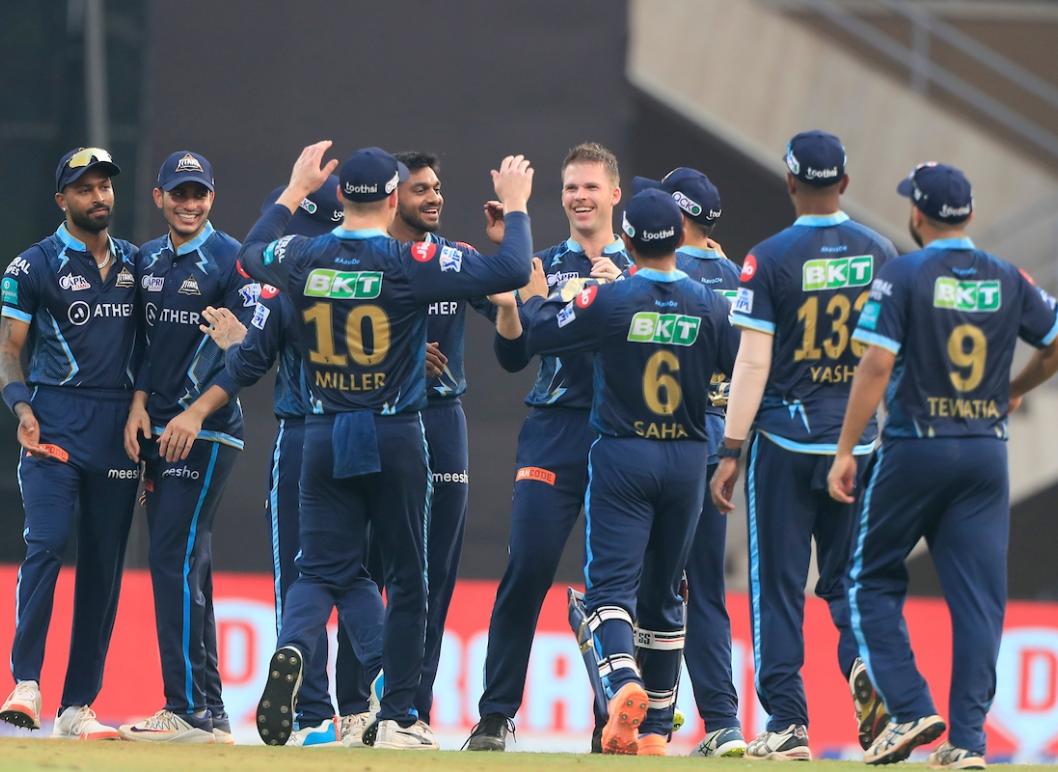 The Gujarat Titans pace battery helped the side beat the Kolkata Knight Riders by eight runs and reclaim the top position. While Kolkata could restrict Gujarat for a reachable target, the failure of the batting line-up saw them losing the 35th IPL 2022 match by a narrow margin.

Gujarat captain Hardik Pandya became the first captain this season to decide to bat after winning the toss. He was also Gujarat's only change, whereas Kolkata brought in Sam Billings, Rinku Singh and Tim Southee replaced Aaron Finch, Sheldon Jackson and Pat Cummins.

Southee justified his selection immediately by having Shubman Gill caught behind down the leg side. Wriddhiman Saha and Pandya then batted for nearly 10 overs and added 75, the bulk of which was scored by Pandya. Saha failed to rotate the strike consistently, and managed only a run-a-ball 25 before Umesh Yadav claimed him.

Pandya kept finding the boundary on a regular basis to bring up his third fifty of the season. He added 50 with David Miller in nearly six overs, but the return of Shivam Mavi got Miller (27 in 20 balls). In the next over, Southee claimed Pandya for a 67-ball 49; it was the first of Rinku Singh's four catches. Southee also dismissed Rashid Khan in the same over to finish with 3-24. Andre Russell, finally coming to bowl in the 20th over, conceded only five while picking up four wickets, to restrict Gujarat to only 156/9.

Losing lost Billings (5), Sunil Narine (5), and Nitish Rana (2) early, Kolkata were left reeling at 16/3 in the fifth over. Shreyas Iyer did not last either, while Rinku Singh hit two fours and a six in his 28-ball 35 before falling to Yash Dayal, but Russell took off at fifth gear, taking 19 off the over to keep Kolkata in the hunt.

Abhinav Manohar then caught Venkatesh Iyer (17) brilliantly at mid wicket to give Rashid his 100th IPL wicket. Mavi did not last either, but Russell found an able partner in Umesh. They took the match to the final over. With 18 required, Russell his the first ball, from Alzarri Joseph, for a massive six, but failed at the second attempt, falling for a 25-ball 48.

As Russell left for 25-ball 48, KKR hopes were gone with him. They lost by 8 runs and Gujarat Titans reclaimed the top of the points table. Six of eight KKR wickets were taken by the GT pacers as Shami and Rashid took 2 each.